With a number of rs. 12.69 lakh (ex-showroom, Delhi) and a comprehensive list of amenities, the much anticipated Tata Harrier price has finally been introduced in India. With its alluring appearance and competitive pricing, we can confidently predict that it will outperform its competitors. Since the Harrier was first displayed as the H5X concept at the 2018 Auto Expo, its style has been one of the main talking points about the aircraft. The good news is that the commercial version adheres to the concept to a significant extent, which has undoubtedly attracted enough attention to generate significant booking numbers.

Tata has added several new amenities to the Harrier’s automatic version, along with new top-of-the-line trim. Learn about the Harrier’s variant-specific attributes.

Last month, Tata introduced the BS6-compliant Harrier in India, but in addition to BS6 compliance, Tata also provided the Harrier with a number of other improvements. The 2.0L diesel engine got 30 horsepower, and the most significant of these was a new 6-speed automated gearbox that was sourced from Hyundai. That is a considerable increase in power. Tata has added a cool new function to the Harrier in addition to an automatic gearbox and additional power.

With a 2.0L turbo-diesel engine from Fiat that produced 140 horsepower, Tata introduced the Harrier in India last year. Only a 6-speed manual transmission was compatible with the powertrain. The Harrier definitely required an automatic gearbox for the pricing and market it plays in to really step up the competitiveness against cars like the Kia Seltos, MG Hector, and Hyundai Creta. Tata’s new 6-speed torque converter gearbox has now successfully bridged the gap. Additionally, the 2.0L turbo-diesel engine now has 170bhp, which is very noticeable in both performances in practice and on paper.

The Harrier received a big feature boost from Tata as well.

A panoramic sunroof, a motorized driver’s seat with six adjustment options, an auto-dimming inside rearview mirror, and two-tone, diamond-cut 17-inch alloy wheels are now included in the Harrier’s top-spec equipment. The new wheels significantly improve the Harrier’s appearance over the older, more boring-looking ones. Tata has also expanded its selection of paint colors with the addition of “Calypso Red” and improved visibility by redesigning the wing mirrors.

Four trim levels—XE, XM, XT, and XZ—were initially offered for the Harrier. With this upgrade, Tata has also unveiled a brand-new top-of-the-line XZ+ trim. Regarding the automated versions, the Harrier is offered in three trim levels: the mid-spec XMA, the high-spec XZA, and the top-of-the-line XZA+ model. Additionally, the XZA and XZA+ models can be ordered with a dual-tone paint job and the “Dark” package, which equips the Harrier with an all-black interior design, black exterior paint, and black alloy wheels.

The revolutionary OMEGA (Optimal Modular Efficient Global Advanced) architecture first appears in the Tata Harrier, the brand’s debut vehicle. The D8 architecture from Land Rover. Which also serves as the foundation for the Discovery Sport, was used to create this platform. However, Tata has altered this platform to support various body types. The Tata Harrier features a new platform. It is the first in its segment and has been developed in-house by the company.

The new Omega platform is based on a multi-material construction. They consists of high-strength steel and high-strength boron steel along with aluminum alloy parts. The platform also comes equipped with a longer wheelbase than before. Making it more stable to drive and giving it added comfort over rough terrain. It also helps reduce cabin noise levels inside the car. Making it more comfortable for passengers to enjoy their ride. No need to listen to annoying noises from outside or inside the cabin.

Additionally, the Tata Harrier is the business’s first vehicle built on the cutting-edge IMPACT 2.0 DESIGN concept. The following production item to feature the latest design language will be the elite hatchback. Centered on the Tata 45X concept. The SUV has an inset grille that merges with the LED daytime running lights. This is to form a unified design piece, as well as Tata’s new “Humanity Line”. The SUV also has a sizable bumper with lower-part chrome skid plates and plastic cladding.

Tata Harrier is the first model under the new design philosophy, IMPACT 2.0. The car gets a new front fascia with chrome accents on the grille. While they are also a part of headlamps as well as the fog lamps at the front bumper. A new set of alloy wheels fit the vehicle as well, adding more appeal to its overall exterior appearance.

The Harrier SUV has a Visteon widescreen 8.8-inch touchscreen infotainment system, which is the best in its class. A top provider of automobile parts, Visteon provides infotainment systems, multi-info screens, and digital instrument clusters to major international companies like JLR. This platform includes side view mirrors, Apple CarPlay, Android Auto, and navigation. 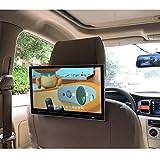 The Tata Harrier SUV is a large-sized SUV that offers you the best-in-class entertainment system. The car comes with a 7-inch touch screen infotainment system and is also compatible with connecting your phone.

Apart from this, the Harrier also comes with a rear camera which will help you while reversing your vehicle. It also comes with automatic climate control and cruise control features along with Bluetooth connectivity options.

The Tata Harrier provides its passengers with a top-notch entertainment experience. The SUV has an audio system from Harman that includes a subwoofer configuration that we have previously seen on the Tata Hexa.

The audio system in the Tata Harrier has been sourced from Harman. The company is famous for making high-quality infotainment systems. They’re working with Tata Motors to integrate its products into the new SUV. Tata Harrier is the new Hero Xtreme in the making. Tata Motors has announced that they have sourced audio systems from Harman to be used in their upcoming cars. This means that you will get an improved music experience when you buy any of their cars in the future.

The Harrier has an interior that is roomy because of its length of about 4.5 meters and longer wheelbase. The Discovery SUV and the Harrier both have the same suspension design, making for a nice experience on any type of road. The SUV has industry-leading comfy seats, automatic dual-zone climate control, charging connections for passengers in the back, etc.

The Tata Harrier has a very roomy cabin. The front seats are very comfortable. The rear seat is large enough for three people and there is also a lot of legroom for back seat occupants. The boot is large and can easily accommodate luggage for four passengers.

The Harrier has a good road presence, but the styling is quite conservative. There are chrome accents on the side which add to the look. The rear end of the car looks a little busy with multiple spoilers and black plastic cladding around the tail lamps which detracts from the overall design.

6. Only For FWD & Manual Gearbox

Tata’s brand-new, five-seat premium SUV is available with an FWS (front-wheel-drive) configuration. All-wheel drive (AWD) is something that the carline is missing out on. The SUV only comes with a manual gearbox, unlike its competitors. Tata Harrier is a subcompact crossover SUV from Tata Motors. The SUV comes with a 2.2-liter 4-cylinder petrol engine mated to a 6-speed manual gearbox and it is available in both FWD and AWD configurations.

Despite having an FWD configuration, the Tata Harrier offers three different drive modes: Standard, Rough, and Wet. These driving modes provide a premium driving experience with improved fuel efficiency. In case you are looking for a comfortable ride, then you can go for the Comfort mode where there is no need to push the pedal hard to accelerate or go uphill. The car will automatically adjust itself according to your speed so that there is no strain on your body while driving long distances.

The 2.0-liter KRYOTEC diesel engine that powers the Tata Harrier is primarily taken from the Jeep Compass. Tata has, however, detuned this motor to increase efficiency. It is capable to produce 140bhp of power and 320Nm of torque. This one is very different from most other engines as it uses an innovative fuel system that involves no air pump, no air filter, and no air-to-fuel ratio sensor. It also does not have any of the traditional emission control devices such as a catalytic converter or particulate filter. This means that it does not need to meet any emission standards. It produces only fumes and smoke, which are harmless.

9. A larger Version Is On The Way

The second half of this year will see the launch of a 7-seater Harrier that is currently being developed by Tata Motors. Cars like the Mahindra XUV500 and the base models of the Toyota Fortuner and Honda CR-V will compete with the Harrier 7-seater vehicle. Tata Harrier is one of the most popular SUVs in its segment right now, but it’s not as powerful as some of its competitors like Mahindra XUV 500 or Maruti Suzuki Vitara Brezza. The new model will be offered with a range of engines from 1.2L petrol and 1.5L diesel to 2.0L diesel or petrol units.

Price-wise, the Jeep Compass, which ranges from Rs 16.6 lakh to Rs 22.86 lakh, is outperformed by the Tata Harrier (ex-showroom, Delhi). The base model of the SUV costs Rs. 12.69 lakh, while the most expensive variation costs Rs. 16.25 lakh (ex-showroom, Mumbai).

Should I purchase one?

Tata Motors was unable to fully utilize the Harrier’s capabilities due to the lack of an automatic variant. But because the automatic offers more simplicity of use while driving, that is set to change, unquestionably for the better. All this for just Rs. 1.5 lakh more than its manual stablemate.

Let’s just claim that you remain unsure. The Harrier was already well-known for its large, pleasant interior, commanding road presence, and reasonable packaging. The additional power and resulting updated dynamics, the addition of new amenities, the persuasive upgrades, and the mouthwatering new red paint tone to stick out in any crowd are what give the 2020 Tata Harrier its compelling advantage over the previous model.

Specifications are of vital importance to ensure that you have the right machine for your requirements. We understand that Tata Harrier Price is a subject of great interest to all our customers, so we have taken the time to compile this information. Our aim is to make it as easy as possible for you to find out the latest Tata Harrier Price OR send us a query and one of our team members will get back to you within 24 hours.